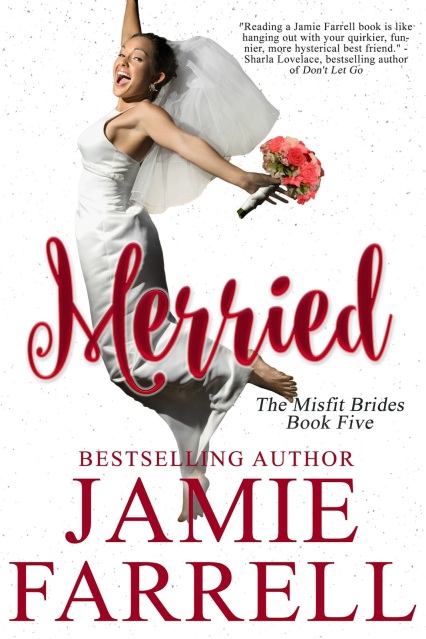 Max Gregory’s family is best known for creating and displaying the infamous
Mrs. Claus diamond ring, but here in the bridal capital of the world, Max is
best known for having a cursed love life. Not that he believes in curses. Or he
didn’t, until he met her. She’s the daughter of a notorious jewel
thief

Merry Silver’s parents have wreaked havoc on her life. After her last romantic
disaster—thanks, Daddy—she’s fleeing
the country for a chance at normal. But first, she has to avoid her favorite
ex-boyfriend while she gets her mom married off. Again.

And their Christmas miracle might be a
second chance at love

Max was devastated when he discovered why Merry disappeared last year. Now
she’s back in Bliss for a wedding, and her father may be after his family’s
most prized possession. But is it the diamond Max is worried about? Or is he
afraid of losing the only woman who’s ever made him want to settle down?

Either way…the family jewels are in danger 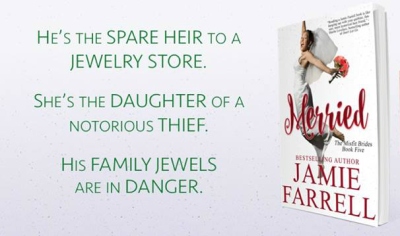 Purchase Links
AMAZON US / UK
B&N / KOBO / iBOOKS
Excerpt
Max Gregory was used to being a man of many hats, though he was looking forward to once again being a man who wore pants. With only a layer of cotton between the winter air and his manhood, he was in danger of freezing his nuts off.He snagged the tiara off the passenger seat of his sister-in-law’s car. The piece was bent and missing several gems, but the crazy-ass, wedding-crashing owl had dropped it back on the stage on its second pass to dive-bomb the festival. Max had rescued the old costume jewelry before the owl could snag it again.

The gems might’ve been fake, but Gramps had designed the tiara for Gran to match the Mrs. Claus Diamond engagement ring that had made With This Ring famous. It deserved a place of honor in the store.

Especially now that Gramps and Gran were both gone.

Keys in hand, Max turned the corner to the rear of the building and stopped dead in his tracks.

Merry Silver—if that was really her name—had her arms crossed over her dark, puffy coat, one hip cocked, and a glower that suggested she’d be happy to use her boot to crush Max’s frozen balls to bits.

His heart twisted, adding a kick to the sudden hollow ache in his chest. He tightened his grip on the tiara and mimicked Merry’s stance.

Of the two of them, he was more worthy of doing the glowering. But instead of lighting up with righteous outrage or fear for his family’s jewels, his bones sagged with a relief he didn’t want to acknowledge.

Merry’s eyes flared wide for a fraction of a second before her glower and her arms dropped.

Had she been expecting someone else?

She had a smart phone in one gloved hand and her other hand balled into a fist.

“What have we here?” Max said softly.

The desire to check the door to his family’s jewelry shop warred with an instinct to not take his eyes off her for a microsecond. Not even to blink.

“My mom’s getting married,” Merry said. “She needs a ring.”

“Most people would go to the front door,” he said. “In the daytime.”

Her head cocked, and the ruddy knit hat hiding her ebony hair tilted. She took another step closer to his family’s store. “I’m sure most people would.”

Max angled toward her and caught a hint of spring flowers. Soft, fragile, feminine. She hadn’t changed her shampoo since he’d last known her.

She shifted closer to With This Ring.

Her cheekbones were sharper, her nose more delicate, her body more clothed than when he’d seen her last.

And unlike those two months he’d known her—when, he’d discovered after hours of research into her father, he hadn’t actually known her at all—she apparently didn’t feel the need to pussyfoot around what she wanted now.

Had she been anyone else, he would’ve pinned her down while calling the cops.

But Max didn’t trust himself to touch her. Because too big of a part of him was drinking in the sight of her whole, alive, and seemingly unharmed.

He twisted to follow her. “Most women want to pick their own wedding ring.”

“When you’ve had seven or eight, the details matter less.”

Seven or—Jesus. He hadn’t looked into her mother.

If she even had one. “She kill the first six or seven?” Max asked.

Her straight, dark eyebrows lowered, and he had the distinct impression they’d just put him in his place before she ever opened her mouth. “Only two. And not in any ways punishable by law.”
Also Available 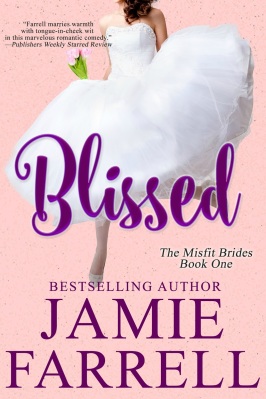 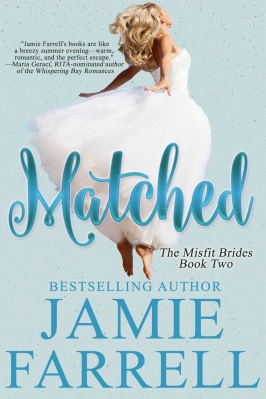 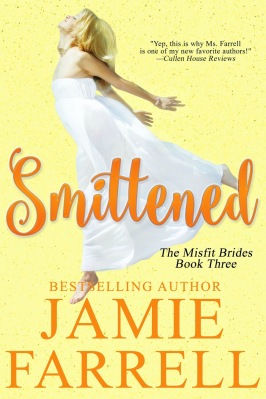 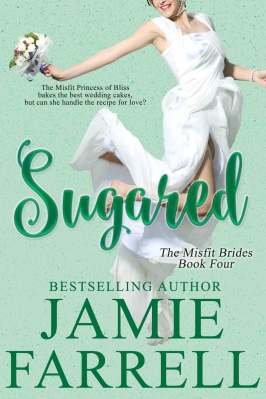 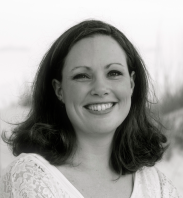 Jamie Farrell writes fun
contemporary romances with quirky characters and lots of heart. She believes
love, laughter, and bacon are the most powerful forces in the universe. Her
debut novel, Southern Fried Blues,
was a finalist in the National Readers’ Choice Awards and the National
Excellence in Romance Fiction Awards, and the first book in her Misfit Brides
series received a starred review from Publishers Weekly, which called Blissed a “marvelous romantic comedy.”A native Midwesterner, Jamie has lived in the South the majority of her adult
life. When she’s not writing, she and her military hero husband are busy
raising three hilariously unpredictable children.
Author Links
FACEBOOK